Fondaway Canyon is an advanced stage gold exploration property located in Churchill County, Nevada, USA, part of an 11-property package acquired by Canarc in March 2017. The property includes 136 unpatented claims covering 900 hectares, and has a history of previous surface exploration and open pit gold mining in the late 1980’s and early 1990’s.

Canarc commissioned Techbase International of Reno, Nevada to complete a technical Report for the Fondaway Canyon Project. The updated resource estimate included in the technical report is shown in the table below.

The Fondaway Canyon mineralization is contained in a series of 12 steeply dipping, en-echelon quartz-sulfide vein-shear zones outcropping at surface and extending laterally over 1200m and vertically to depths of > 400m. The Paperweight, Half-moon and Colorado zones host the bulk of the resources, with the remainder in parallel veins or splays of the major vein-shears.

A total of 591 historic drill holes were validated for resource estimation, with coordinate information and down hole assays. These included 8411m of core drilling in 49 holes and 40,675m of RC drilling in 551 holes. Drill core was inspected at the Fallon, NV storage facility and assay certificates were viewed to verify gold intercept grades used in the estimate.

A Mineral Resource was estimated for each vein using polygonal estimation on drill intercepts projected onto a vertical long-section parallel to the average strike direction of that vein. The polygons were truncated at faults that were interpreted to limit the extent of the mineralization.

The Mineral Resources are reported at a cut-off of 3.43 g/t, over a minimum horizontal width of 1.8m, based on projects of similar size, a gold price of $US 1,225 per oz, a metallurgical recovery of 90%, and an underground mining method suitable for steeply-dipping veins. A processing method has not yet been selected.

No capping or cutting of grades was applied. The assayed grades were found to be very consistent when compared to check assays and duplicates, as well as between twinned holes. The consistency in assay results was interpreted as being due to the very fine-grained nature of the gold mineralization (1 to 10 µm). This consistency provided confidence that the higher-grade assays were reasonable.

Figure 1 shows the location by zone of the Fondaway Canyon resources. 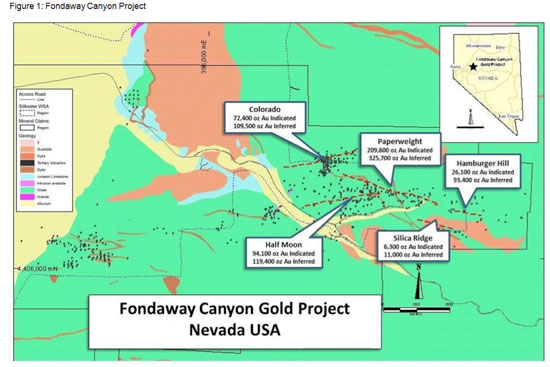 The current Mineral Resource estimate relates only to the eastern half of the 4000m east-west striking mineralized system, and does not include any estimates for near-surface, oxide mineralization. Significant exploration potential remains both in the eastern section, and relatively untested western zone.

Multiple exploration targets have been identified along favorable structural extensions that have potential to host additional significant gold resources. A 30-hole drill program, estimated to cost $2.0 million, has been recommended by Techbase International to explore these identified targets as well upgrade more of the resources into the indicated category.

During April, with the support of two very experienced Nevada based geologists, Canarc will initiate a comprehensive review of all of its newly acquired Nevada properties to evaluate the potential of and prioritize exploration plans for each property.

Mr. Catalin Chiloflischi, CEO of Canarc, stated: “The confirmation of previous resource estimates for the Fondaway Canyon project marks another important step forward for Canarc towards expanding our gold resource base. During 2017, Canarc is planning to allocate additional resources in order to further advance its Nevada projects. We are very excited about Canarc’s new focus and oportunities in Nevada.”

About Canarc Resource Corp. - Canarc is a growth-oriented, gold exploration and mining Company listed on the TSX (CCM) and the OTC-BB (CRCUF). The Company is currently focused on acquiring operating or pre-production stage gold-silver-copper mines or properties in the Americas and further advancing its gold properties in Nevada and BC.

Cautionary Note Regarding Forward-Looking Statements
This news release contains “forward-looking statements” within the meaning of the United States private securities litigation reform act of 1995 and “forward-looking information” within the meaning of applicable Canadian securities legislation. Statements contained in this news release that are not historic facts are forward-looking information that involves known and unknown risks and uncertainties. Forward-looking statements in this news release include, but are not limited to, statements with respect to the planned completion of the Acquisition, potential strategic M&A transactions being contemplated by Canarc, the future performance of Canarc, and the Company's plans and exploration programs for its mineral properties, including the timing of such plans and programs. In certain cases, forward-looking statements can be identified by the use of words such as "plans", "has proven", "expects" or "does not expect", "is expected", "potential", "appears", "budget", "scheduled", "estimates", "forecasts", "at least", "intends", "anticipates" or "does not anticipate", or "believes", or variations of such words and phrases or state that certain actions, events or results "may", "could", "would", "should", "might" or "will be taken", "occur" or "be achieved".