Vancouver, Canada – January 16, 2018 – Canarc Resource Corp. (TSX: CCM, OTC-BB: CRCUF, Frankfurt: CAN) is pleased to report results from the final four holes of its seven-hole drilling program completed in late 2017 at its Fondaway Canyon Project in Nevada (Table 1). Assays for the first three holes were released on December 5, 2017. All holes in the drill program intersected gold mineralization.

Catalin Kilofliski, CEO of Canarc, stated: "The results of our last four holes continue to provide encouragement for Fondaway Canyon.  Mineralization in the three areas tested by these holes has been significantly extended to depth and along strike.  For example, FC17-5 has extended high-grade (>3 gpt Au) mineralization about 100 m along strike within a broad northeast-striking mineralized corridor that contains FC17-4, 400 m to the northeast.  This corridor is open to the southwest and has not been tested to depth over much of its strike length of at least 700 m.  We were also successful in extending high-grade mineralization to depth in the South Mouth area with hole FC17-7.  Our 3D analysis and geological review is on-going and will assist in developing an exploration action plan and next steps for 2018. ”

The broad zones of mineralization intersected in the drilling program extend mineralized zones to depth and along strike and, together with previous exploration results, define bulk tonnage mineralization that may be amenable to open pit mining.  Previous efforts in the district focused on the underground mining potential of the district by exploring narrow high-grade zones.

FC17-5 (359.4 m, S3oW/-60o) tested the South Pit area. High-grade mineralization was intersected in two zones.  The upper zone, with 2.71 gpt over 3.7 and 2.28 gpt over 3.5 m lies about 200 m below the small South Pit.  It likely represents the down-dip extension of steep mineralization exposed in the pit.  However, the stronger, lower zone in the hole may represent the southwestward extension of the northeast-striking Half Moon mineralized corridor intersected in FC17-4 about 400 m to the northeast.  This is a significant finding and greatly expands the potential of this northeast mineralized corridor, as it has been poorly tested southwest of FC17-4.  Intersections in this lower zone are essentially open below the end of the hole at 359.4 m and include 4.19 gpt Au over 4.0 m with 13.40 gpt over 0.9 m, 3.37 gpt over 4.0 m, and 3.48 gpt over 12.8 m with 13.50 gpt over 0.6 m.

FC17-6 (370.6 m, N11oE/-50o) tested the eastern part of the South Mouth area, where shallow open-pit mining was completed by Tenneco Minerals in 1989.  Gold at South Mouth occurs within east-striking, steep shear-type veins and in broader disseminated zones along a swarm of mafic dikes.  Low-grade mineralization was intersected in the upper parts of the hole and in the bottom 6.1 m (1.29 gpt Au), with mineralization open at depth.  Although no high grade gold (>3 gpt) was intersected in the hole, the lowest zone, about 250 m below surface, may mark the western extension of the east-west trending Mid Realm structural zone, which contains surface rock-chip samples to 4.6 gpt Au and has been poorly drill tested.

FC17-7 (187.5 m, N14oE/-50o) tested the western part of the South Mouth area adjacent to the range-front fault.  The hole was designed to cross below a west-northwest striking mineralized vein-stockwork zone mined shallowly by Tenneco.  The mineralized zone is at least 35 m wide and includes post-mining rock-chip samples reaching 4.32 g/t Au over 2 m.  FC17-7 was unfortunately abandoned prior to its target depth of 365 m due to drilling difficulties caused by broken ground within a fault zone.  The hole reached the south edge of the mineralized zone about 100 m below surface.  An interval of stockwork quartz veins at the bottom of the hole assayed 2.06 gpt Au over 5.2 m containing 5.99 gpt over 1.2 m.  The veining is adjacent to altered mafic dikes and marks the south margin of the mineralized zone.  Although successful in extending high-grade mineralization 100 m below surface, FC17-7 did not completely test the target. 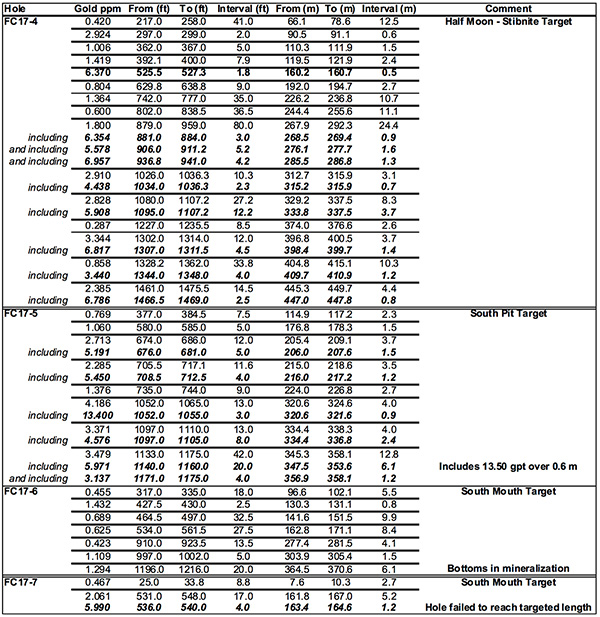 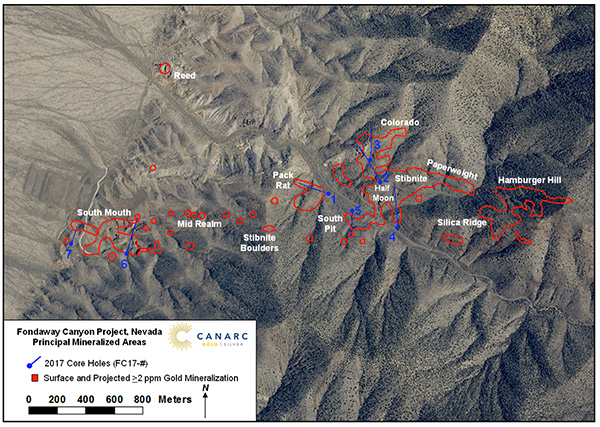 Dr. Jacob Margolis is a qualified person, as defined by National Instrument 43-101, and has approved the technical information in this news release.  Dr. Margolis is engaged as a consultant to Canarc Resource Corp as Vice President of Exploration.

The Company employs a rigorous QAQC protocol, including insertion of control samples at a rate of 1 per 100 feet of core, or approximately 1 per 22 samples.  Control samples include a blank and four gold standards at various grades.  Samples were processed by Bureau Veritas Minerals, an ISO-certified lab that meets the requirements of ISO/IEC 17025:2005 and ISO 9001:2015, and employs its own QAQC procedures, including duplicate analyses of core pulps and rejects and insertion of its own standards and blanks.  No significant discrepancies were found in the assay results to date.

The Fondaway Canyon project consists of 136 leased unpatented mining claims covering 2,220 acres in Churchill County, Nevada, 70 kms northeast of Fallon.  A NI-43-101 technical report, completed in April, 2017, prior to the drilling reported here, and available on SEDAR, reported an indicated resource of 2.05 million tonnes grading 6.18 gpt containing 409,000 ounces of gold and an inferred resource of 3.20 million tonnes 6.40 gpt gold containing 660,000 ounces of gold.  This estimate does not include all mineralized areas in the project, such as the Pack Rat area tested by hole FC17-1.  The project contains a gold-bearing shear-zone system that is at least 3.8 km long and up to 1 km wide.

About Canarc Resource Corp. - Canarc is a growth-oriented, gold exploration and mining Company listed on the TSX (CCM) and the OTC-BB (CRCUF). The Company creates shareholder value by acquiring, exploring and developing pre-production stage gold mines or properties in the Americas.

This news release contains “forward-looking statements” within the meaning of the United States private securities litigation reform act of 1995 and “forward-looking information” within the meaning of applicable Canadian securities legislation. Statements contained in this news release that are not historic facts are forward-looking information that involves known and unknown risks and uncertainties. Forward-looking statements in this news release include, but are not limited to, statements with respect to the future performance of Canarc, and the Company's plans and exploration programs for its mineral properties, including the timing of such plans and programs. In certain cases, forward-looking statements can be identified by the use of words such as "plans", "has proven", "expects" or "does not expect", "is expected", "potential", "appears", "budget", "scheduled", "estimates", "forecasts", "at least", "intends", "anticipates" or "does not anticipate", or "believes", or variations of such words and phrases or state that certain actions, events or results "may", "could", "would", "should", "might" or "will be taken", "occur" or "be achieved".