The Hard Cash Property is a located in the Ennadai Greenstone Belt in SW Nunavut on the shores of Ennadai Lake. The property is 310 km NE or Stony Rapids, Saskatchewan or 700 km ESE of Yellowknife, N.W.T and is accessible by float plane or helicopter. There is an all-weather gravel airstrip at Ennadai Lake Lodge, 35 kms east of the property. 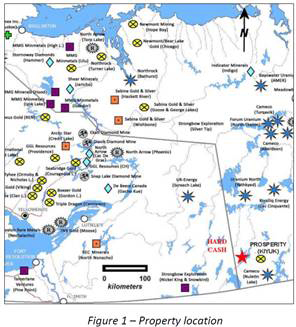 High grade mineralization in float boulders was discovered on the west shore of Ennadai Lake by Don Cameron in 1946 at the Swamp Showing. The showing was staked and 9 holes were drilled and several blast trenches excavated at the northern end of the Swamp Showing near Ennadai Lake. None of this work was filed for assessment and the claims lapsed in 1956 and the data is lost.

Giant Yellowknife Mines picked up the Swamp Showing in 1981 and took a claim to lease. Phelps Dodge optioned the lease and staked the surrounding area in 1995. From 1995 to 1997, they conducted prospecting and mapping and ran ground magnetometer, VLF and IP survey on a grid centered on the Swamp Showing. Homestake Mining staked surrounding ground to the east in 1992 and located the Wish zone and the 4600 vein. Other gold showings were discovered north of the Swamp showing during this period including iron formation hosted gold at the ENN showing. Claims in the area were allowed to lapse and were re-staked by Panarc Resources in January 2011. In 2012, Panarc conducted prospecting and geological mapping focused on the Swamp Showing. The claims were subsequently sold to Silver Range Resources Ltd. who conducted geological programs on the property in 2016 and 2017.

Most work to date has focused on the Swamp Trend where high grade Archean lode gold mineralization occurs in float and bedrock over a distance of 1.1 kilometers with samples of quartz-galena-chalcopyrite-pyrite have returned assays up to 174 g/t Au. The Swamp Showing at the northeast end of the trend consists of quartz-sulphide veins returning grab samples up to 36 g/t Au in quartz-sericite schist within a 60 to 100 m wide shear zone.

In 2016 and 2017 Silver Range Resources conducted total magnetic field and horizontal loop electromagnetic field surveys along approximately 1500 meters of the Swamp Zone in an area covering the extensive boulder train. The gold mineralization occurs immediately south of an electrical resistivity low along a break in the total magnetic field.

Surveys by Phelps Dodge in the 1990’s identified coincident IP resistivity lows and chargeability highs in the immediate area of the in-place veins at the north end of the Swamp Showing. In 2016, Silver Range Resources discovered the Pond Showing 3.4 km to the southwest of the in-place veins along the same trend and returned grab samples up to 11.45 g/t Au.

The property is located within the Ennadai Greenstone Belt of the Churchill Province. Rock units in the area of gold mineralization consist of basal mafic volcanics metamorphosed to the upper greenschist / lower amphibolite facies and intruded by granite.  An extensive, NE striking sericitized shear zone occurs along the contact between the mafic and felsic volcanic sequences in the area of the Swamp and Pond zones. The shear zone has an apparent strike length in excess of 3 kilometers, defined by ground geophysical surveys and mapping. At the Swamp showing it is up to 100 meters wide3 and records three phases of ductile and brittle deformation.

Gold mineralization occurs in the later stage laminated quartz veins and includes pyrite, galena, chalcopyrite and telluride together with white ribbon quartz. Float from these veins is exposed in a nearly continuous train extending 1400 meters to the southwest of the Swamp Showing and has returned material grading 174 g/t Au and 1192 g/t Ag with 25 of 63 samples collected to date returning >5 g/t Au. In-situ quartz veins up to 50 cm wide, in limited surface exposures, have yielded bedrock samples containing up to 125 g/t Au and 719 g/t Ag. The Pond Showing, 3.2 Km on strike from the Swamp Showing has similar material in place with bedrock samples returning up to 11.45 g/t Au.

Status: Ground total magnetic field (TMF) and horizontal loop electromagnetic (HLEM) surveys over the combined boulder train and bedrock showings indicate that the Swamp Showing mineralization follows the south flank of an HLEM conductor, along the sharp north flank of a TMF high. With these controls on mineralization identified, this target is ready for drill testing.

The Nigel property is located 15 km west of the Hard Cash property in the same belt of favourable metavolcanic rocks that host the mineralization at Hard Cash. The Nigel property covers three structurally hosted Archean lode gold occurrences (NUMIN Nigel, Clyde and Bob showings) which consist of quartz-carbonate veins carrying pyrite and galena. These have returned historical assays up to 13.56 OPT Au (464.9 g/t Au). The showings were staked and explored in August 2016. Confirmatory sampling at the Nigel showing returned values of 398 g/t Au and 178 g/t Au. A sample of wall rock returned 2.57 g/t Au.