The 2006 drill program has now been successfully completed with the 24,394 m of drilling in 69 diamond drill holes into the C vein system. The final drilling highlights are shown in the following table:

True widths are approximately 70% to 90% of core lengths.

Six deep drill holes were drilled in 1995 to test the C vein system at depth.  Five holes intersected high grade gold mineralisation between the elevations of 570 m and 700 m below sea level (b.s.l.) (see table below), however, the bottom of the C vein drill grid in 1995 was at only 250 b.s.l., leaving a large un-drilled gap between the -250 m and -570 m elevations.

Hole 1768DE2 and other deep holes of the 2006 drilling  have now demonstrated the continuity of the C vein to a minimum depth of 500 metres b.s.l., while the deeper footwall zone outlined by two drill-holes in 1995 at 700 m b.s.l. remains untested and is open for expansion.

An independent N.I. 43-101 resource estimate is now underway, focusing on the C vein system at New Polaris. It will cover many, but not all, of the resource areas estimated historically by Beacon Hill (1988) and Giroux (1995). The resource study is scheduled for completion and release in January 2007.

James Moors, B.Sc., P.Geo, Vice President, Exploration, is the Qualified Person supervising the 2006 drill program on the New Polaris property.  He has instituted a Quality Control sampling program of blanks, duplicates and standards to ensure the integrity of all assay results.  All drill core is split by Canarc personnel at the New Polaris camp, and then flown to Vancouver for assay by ALS Chemex.  The core samples are dried, crushed, split and a 30-gram sub-sample is taken for analysis.  Gold content is determined by fire assay with a gravimetric finish on samples containing greater than 1 gpt Au, and other trace elements are analyzed by atomic absorption.  ALS Chemex also uses its own standards for quality control checks.

Canarc Resource Corp. is a growth-oriented, gold exploration company listed on the TSX (symbol CCM) and the OTC-BB (symbol CRCUF).  The Company’s principal asset is its 100% interest in the New Polaris gold deposit, British Columbia, Canada. 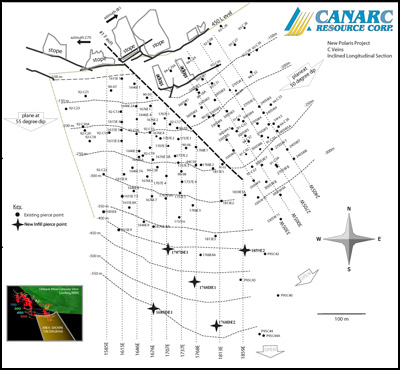 Certain statements contained herein regarding the Company and its operations constitute “forward-looking statements” within the meaning of the United States Private Securities Litigation Reform Act of 1995.  All statements that are not historical facts, including without limitation statements regarding future estimates, plans, objectives, assumptions or expectations of future performance, are “forward-looking statements”.  We caution you that such “forward looking statements” involve known and unknown risks and uncertainties that could cause actual results and future events to differ materially from those anticipated in such statements.  Such risks and uncertainties include fluctuations in precious metal prices, unpredictable results of exploration activities, uncertainties inherent in the estimation of mineral reserves and resources, fluctuations in the costs of goods and services, problems associated with exploration and mining operations, changes in legal, social or political conditions in the jurisdictions where the Company operates, lack of appropriate funding and other risk factors, as discussed in the Company’s filings with Canadian and American Securities regulatory agencies.  The Company expressly disclaims any obligation to update any forward-looking statements.  We seek safe harbour.