The New Polaris project is situated in northwestern British Columbia, 100 km south of Atlin, B.C., and 60 km northeast of Juneau, Alaska, on the west bank of the Tulsequah River near the B.C. - Alaska border.

Small aircraft carrying personal and/or supplies can reach the site from Atlin or Juneau. Heavier mine equipment and supplies can be barged to the minesite via the Taku River.

Canagold holds a 100% interest in 61 crown granted mineral claims and 1 modified grid claim totaling 2,956 acres. The project is subject to a 15% net profits interest to Rembrandt Gold Mines, which can be reduced to 10% NPI for 150,000 shares.

In the past year, Canagold completed a 54-hole, 30,000-meter infill and resource expansion drilling program from June 2021 to March 2022. The program is designed to upgrade inferred resources to indicated resources, contribute to mine and plant engineering, environmental permitting and work towards completing a feasibility study. The drill program concentrated on infill drilling and expansion of the C-West Main vein which hosts the bulk of the resources (below). Drilling in other parallel and adjacent zones, including the C9 and C10 zones have also return significant high-grade intercepts.

Canagold is now targeting Y-veins in a summer/fall program of approximately 8000 metres.  The most recently results from the summer/fall 2022 program reported, October 27, included 22.1 gpt gold over 4.3 m in Y-Vein system.

In October this year, Canagold engaged Ausenco Engineering to complete the feasibility study. 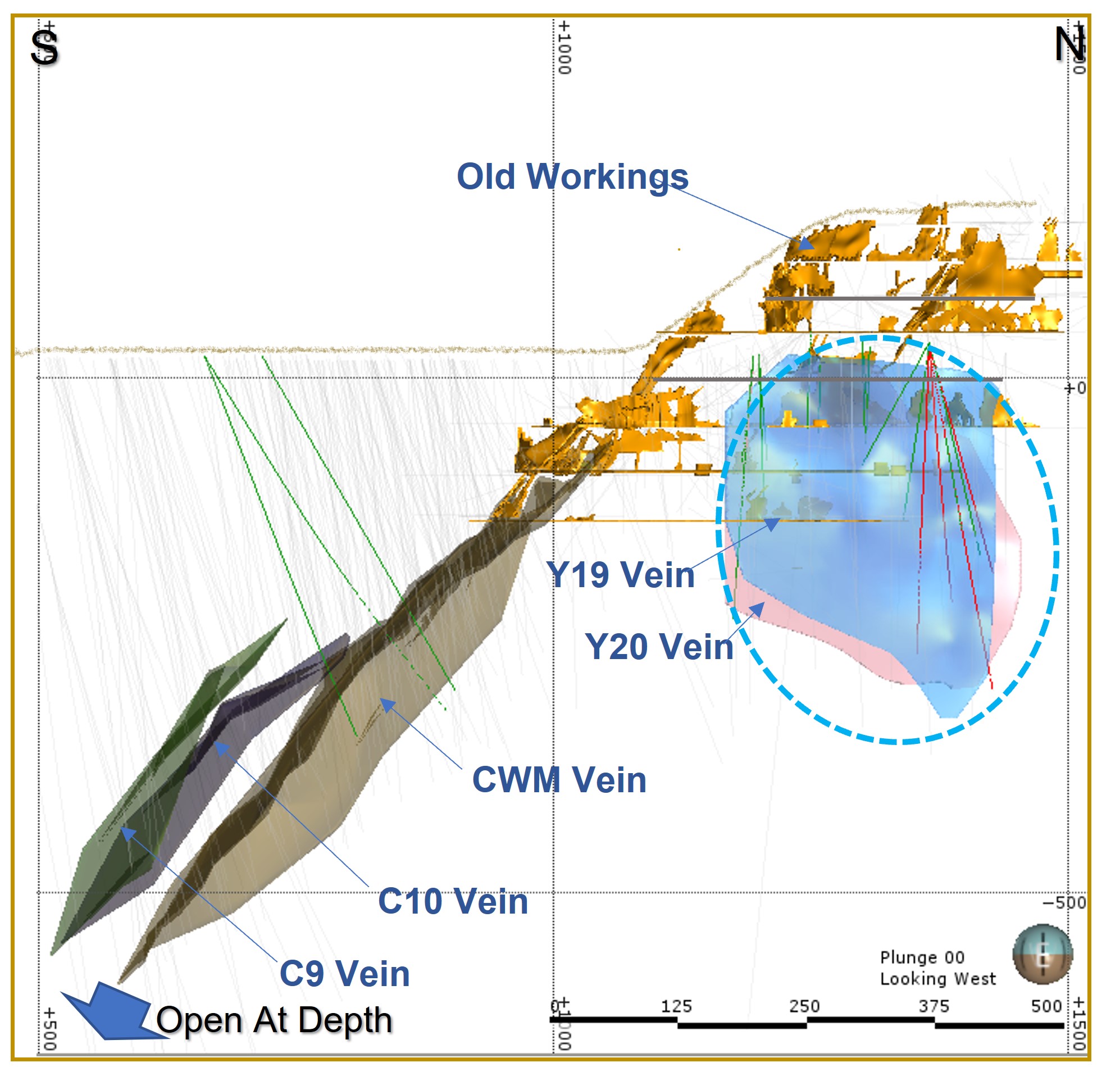 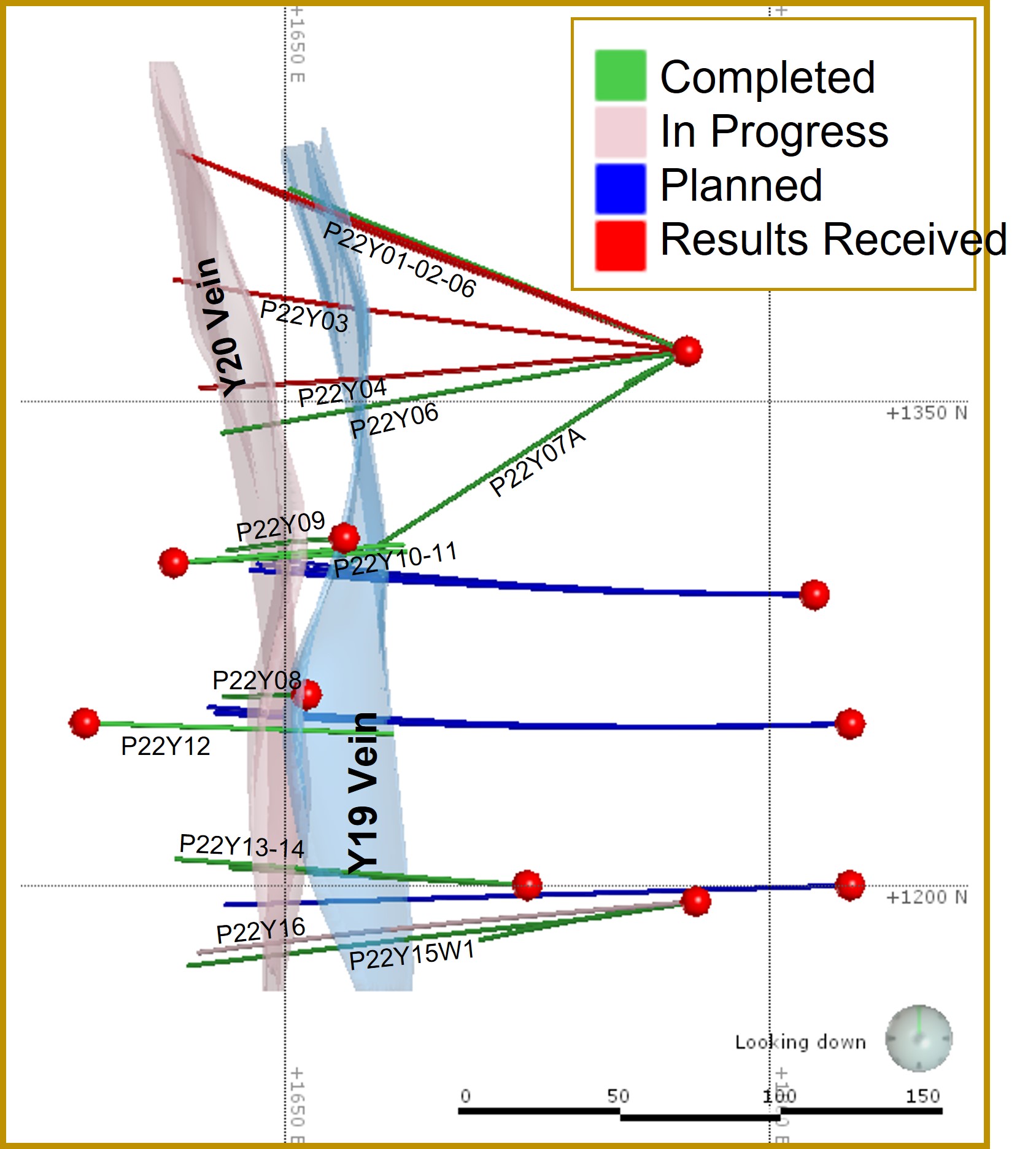 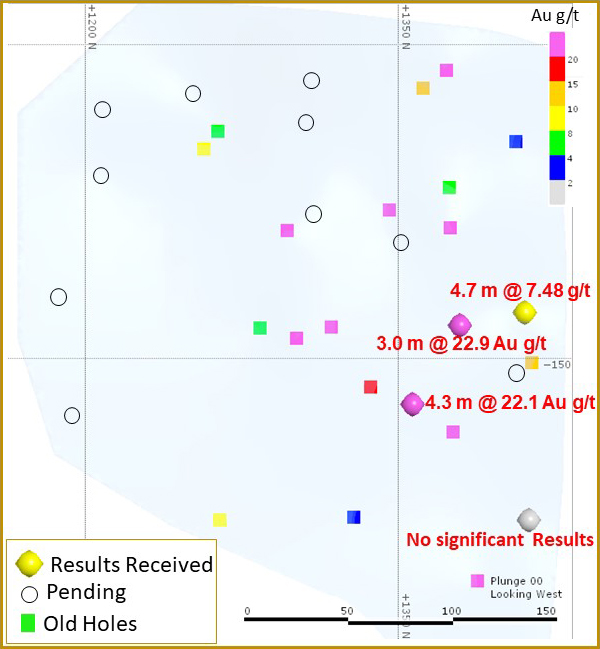 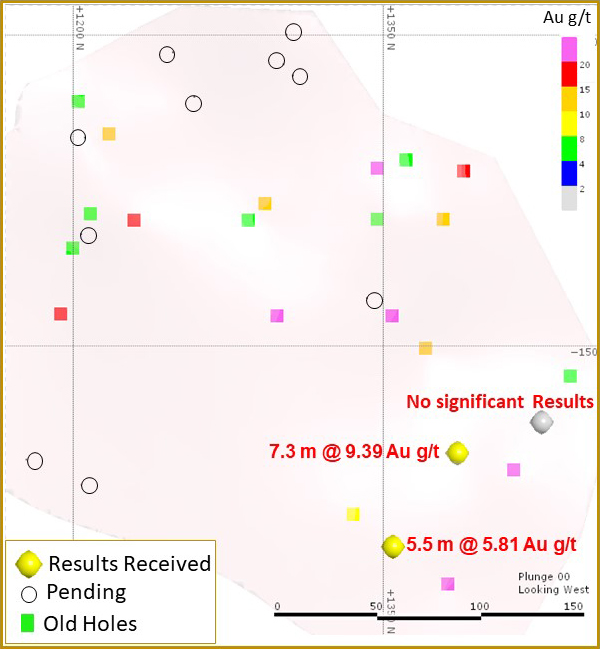 Canagold updated its positive preliminary economic assessment of New Polaris in February 2019 for the construction of 80,000 oz per year high grade, underground gold mine with on-site processing to include flotation, bio-oxidation followed by CIL leaching and refining to produce dore gold bars at site.  Higher gold prices and the revised treatment process to produce dore gold bars at site have a significant positive impact on the project economics. Using a gold price of ($US1,500 per oz), $CA /$US exchange rate (0.71) with cash costs of US$400 per oz, the updated Moose Mountain PEA generates a 5% after-tax Net Present Value ("NPV") of CA$469 million with an after-tax Internal Rate of Return ("IRR") of 56% and a 1.9 year pay-back period. On a pre-tax basis, the undiscounted life-of-mine cash flow totals CA$847 million.

Prospectors discovered gold at New Polaris in 1929. The mine, then known as Polaris Taku, was built in 1937 and commissioned a year later. It operated until 1942, shut down due to World War II, and then restarted in 1946 and operated until 1951. In 1951, a barge loaded with gold concentrate sunk off of the coast of BC in a violent storm. As a result the mine closed. Cominco owned and operated the nearby Tulsequah Chief and Big Bull deposits and in 1952 leased the site Polaris-Taku site and upgrade the mill to process ores mined from these deposits. This continued until 1957. During the mines operation, a total of 232,000 oz. gold was produced from 691,000 tonnes of ore grading 11.9 grams per tonne (0.35 oz./ton). Gold concentrates were shipped to a smelter in Tacoma, Washington for refining. About 15,796 m of under-ground development on 10 levels, and 3,747 m of raise development were completed at New Polaris. The deepest level of the mine is 187 m below sea level. A 250 m internal winze was used to haul ore to the main haulage access level. Mining methods included long-hole, shrinkage and resuing. New Polaris then lay dormant for 30 years until exploration resumed in 1988. Canagold acquired New Polaris in 1992 and since has drilled 241 holes totaling 64,000 m of core, outlining significant new ore below and beyond the old mine workings.

The New Polaris resource, at various cut-off grades, which was updated on February 28, in the report titled:  New Polaris Project, British Columbia, Canada, 2019 Preliminary Economic Assessment is shown in the table below. 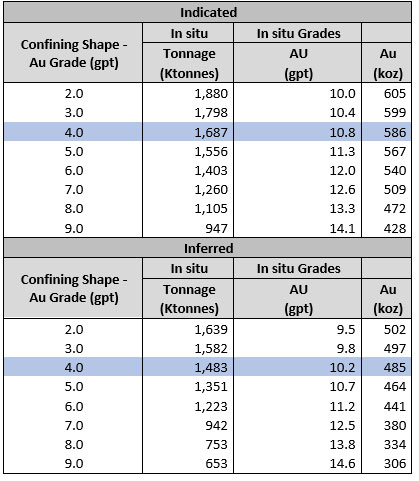 The Mineral Resource Estimate was prepared by Sue Bird, P.Eng. in accordance with CIM Definition Standards (CIM, 2014) and NI 43-101, with an effective date of February 28, 2019. Mineral Resources that are not mineral reserves do not have demonstrated economic viability.

The mineralized veins are hosted within Paleozoic-aged mafic volcanic rocks and are developed along three principal vein sets adjacent to a major crustal break. Gold mineralization is late Cretaceous to Early Tertiary, and is very similar in terms of wall rock alteration, style of mineralization and host rock material to well-known Archean lode gold deposits such as Goldcorp's multi-million ounce Red Lake deposits.

C-veins generally link with the AB and with the Y veins at "junction arcs". Gold values within the veins show excellent continuity and uniformity, with very little nugget effect. Individual zones pinch, swell, and overlap en echelon. Width of gold mineralization ranges from 0.3 to 15 m in thickness, but tends to average about 3 m.

Historically, the mine operated at a rate of 200 tons per day. Ore was crushed through primary and secondary crushers, and ground in a ball mill. A standard flotation circuit was used to concentrate the ore prior to being shipped off site. Historical gold recoveries averaged 90% and concentrate grades ranged from 3.5 - 5.0 oz per ton gold.

Recently Canagold performed metallurgical test work that utilized flotation, bio-oxidation of the flotation concentrate followed by CIL leaching and refining to produce gold dore bars at site. These tests achieved an average recovery of 90.5%. Additional metallurgical test work will be conducted during the feasibility stage to optimize the processing conditions.

Several historic buildings have been refurbished and serve as both sleeping quarters and the kitchen facility during the most recent drilling campaigns in 2006. The historic machine shop has also been maintained as a maintenance facility.

Cautionary Note to US Investors- The United States Securities and Exchange Commission limits disclosure for US reporting purposes to mineral deposits that a company can economically and legally extract or produce. We use certain terms on this web site, such as "reserves, " "resources," "geologic resources," "proven", "probable", "measured", "indicated," or "inferred," which may not be consistent with the reserve definitions established by the SEC. U.S investors are urged to consider closely the disclosure in our Form 20-F, File No. 000-18860. You can review and obtain copies of these filings from the SEC's website at www.sec.gov/edgar.shtml.

Garry Biles, P. Eng, President & COO for Canagold Resource Corp, is the Qualified Person who reviewed and approved the contents of this section.