Hard Cash is located 310 km NE of Stony Rapids, Saskatchewan, on the shores of Ennadai Lake.  Access is provided by float plane or helicopter, and there is an all-weather gravel strip at Ennadai Lake Lodge, 35 km east of the property (see map below). Nigel is located 15 km west of Hard Cash. 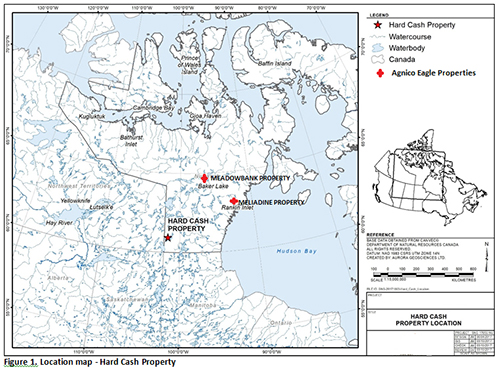 Hard Cash is underlain by the Ennadai Greenstone Belt of the Churchill Province, which are similar rocks to those hosting the Meadowbank and Meliadine gold deposits of Agnico Eagle. Gold mineralization at Hard Cash and Nigel occurs in high grade quartz veins and lower grade shear zones hosted by basal mafic volcanics overlain by felsic volcanics metamorphosed to upper greenschist/ lower amphibolite facies and intruded by granite.

An extensive, NE striking sericitized shear zone occurs along the contact between the mafic and felsic volcanic sequences in the area of the Swamp and Pond high grade gold showings at Hard Cash. The shear zone has an apparent strike length in excess of 3 kilometers defined by geophysical surveys and geological mapping and near the Swamp zone, it is up to 100 meters wide.  Gold mineralization occurs with disseminated sulfides in the shear zone and as late-stage laminated quartz veins containing pyrite, galena, chalcopyrite and gold-silver tellurides.

The Nigel property lies in the same belt of favorable meta-volcanic rocks that host the mineralization at Hard Cash.

Gold was discovered on the Hard Cash property in 1946 in the area of the Swamp showing. Historical exploration programs revealed that locally high-grade gold occurs within quartz-carbonate veins within a strongly developed northeast-trending shear zone and several other zones of auriferous shear hosted mineralization as well as one showing within a banded iron formation.

Work to date has identified multiple high grade Archean lode gold showings along a 3.4 km long trend.  Bedrock mineralization is best exposed at the Swamp Showing at the northeast end of the trend where quartz-sulphide veins occur within a 60 to 100 m wide shear zone.  Here, grab samples of in-place material have returned up to 36 g/t gold and float samples have returned up to 174 g/t gold and 1,192 g/t silver.  Geophysical surveys have identified coincident magnetic breaks and EM resistivity lows along the length of the trend.

Rock chip sampling of float boulders up to 2.7 kms southeast along the southeast-trending shear zone returned several high-grade values including 6.81 and 12.45 gpt gold from two separate locations and a large boulder, 450 meters south of the Swamp zone, returned a value of 95.7 gpt gold and 251 gpt silver.

The property has seen only minor, shallow historical drilling.  Nine holes were drilled at the northern end of the Swamp Zone between 1946 and 1956 for which no data are available. In 2017 Silver Range conducted a small program of very shallow pack sack drilling (29 meters in 7 holes) which failed to reach targeted structures and depths due to mechanical issues with the equipment.

Canarc considers these results to be historical, Canarc’s consulting geologist visited the property and sampled similar high grade gold assays in rock chip samples but it has not completed sufficient work to independently verify these historical results, and therefore they should not be relied upon.

Samples collected by Canarc personnel during a site visit in September 2018 included 72.6 g/t Au and 14.6 g/t Au for quartz vein  float and outcrop samples collected in the vicinity of the Swamp zone showing.

To earn 100% interest in these properties, Canarc has the option to make $150,000 in cash payments and issue 1,500,000 shares over a four year period to Silver Range (all cash payments in CAD$) as follows:

Upon exercise of the option by Canarc, Silver Range will retain a 2% NSR Royalty on the properties of which Canarc can purchase 1% for $1,000,000.  Silver Range shall be entitled to a one-time payment of $1 per ounce of gold (or the value equivalent in other metals), identified in a National Instrument 43-101 compliant measured and indicated resource estimate applicable to either of the Properties.

Silver Range shall also be entitled to receive an additional one-time payment of $1 per ounce of gold (or the value equivalent in other metals), identified in a NI 43-101 compliant proven or probable reserve estimate applicable to the Property. All payments for resource ounces to Silver Range may be made in cash or shares or a combination of both cash and shares, at the election of Canarc.

Canarc plans to complete a more detailed review of the historical exploration information for the properties, conduct an airborne geophysical survey, plus geological mapping and geochemical sampling to identify high priority targets for an exploration drilling program.

Garry Biles, P.Eng, President & COO for Canarc Resource Corp, is the Qualified Person who reviewed and approved the contents of this news release.

This news release contains “forward-looking statements” within the meaning of the United States private securities litigation reform act of 1995 and “forward-looking information” within the meaning of applicable Canadian securities legislation. Statements contained in this news release that are not historical facts are forward-looking information that involves known and unknown risks and uncertainties. Forward-looking statements in this news release include, but are not limited to, statements with respect to the future performance of Canarc, and the Company's plans and exploration programs for its mineral properties, including the timing of such plans and programs. In certain cases, forward-looking statements can be identified by the use of words such as "plans", "has proven", "expects" or "does not expect", "is expected", "potential", "appears", "budget", "scheduled", "estimates", "forecasts", "at least", "intends", "anticipates" or "does not anticipate", or "believes", or variations of such words and phrases or state that certain actions, events or results "may", "could", "would", "should", "might" or "will be taken", "occur" or "be achieved".